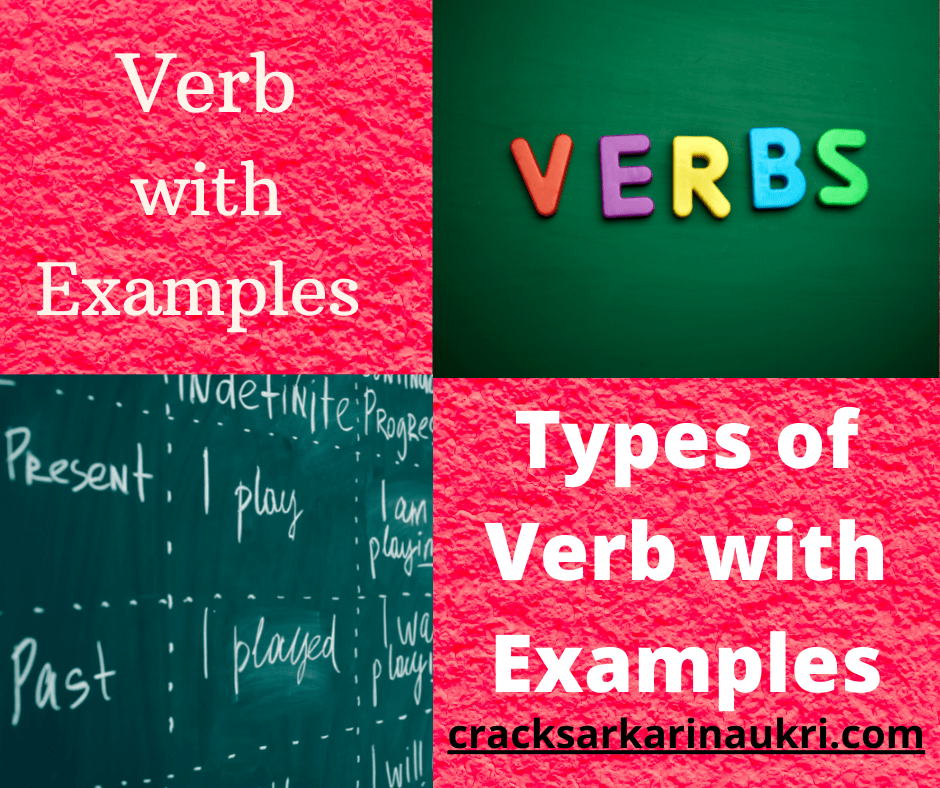 First of all, let us try to know why a verb is needed.

Read the examples given below –

In all these examples, without the words given in blue colour, would they have any meaning?
Is it?
So all these words are telling us what we are doing by doing noun or pronoun. So we call these words Verb.

Those words in a sentence which show the action or state of being (exist, present) are known as verbs.

The words which indicate the doing or the happening of some action are called verbs.

If put in simple words, whatever the subject does, has done, or will do, it is called a verb.

Three things are most important in a complete sentence –

So we can say that without a verb, no sentence will have any meaning.

The verb is the essential part of any sentence.

The words given below are verbs –

All these verbs tell you to do the work.

Ram is a clerk.

In this, the word is telling the state of Hari.
There can be no such sentence in which there is no verb.

There are only two types of Sentence, a sentence in which it is told to do an action and the other which shows the state of existence of a subject.
According to this, Verbs are mainly divided into two types.

Let us understand them in detail –

It tells the action of the subject.

The goats are grazing grass.

Sita is swimming in the river.

There are two types of the main verb-

Such verbs which require an object to convey the whole meaning of the sentence are called transitive verbs.

Examples of the transitive verb

Sachin loves ice cream.
I caught fish.
Geeta sent a letter to her father.
The horses carry the warriors.
If we read carefully, we will find that all the sentences will be of incomplete meaning by removing blue colour words. These blue coloured words are called object deeds.

Those verbs which are complete without an object are called intransitive verbs.

Example of the intransitive verb

They swim.
The prisoner escaped.
The sun is shining.
Anshika sang.
In these verbs like swim, escape, shine sang, we can make a complete sentence without using any object.
Always Intransitively used verb – come, go, die, fall, lie, sleep, etc.
Passive voice is not formed in intransitive verbs.
Most verbs are those that become both transitive and intransitive.

The parrots fly.
He flies a kite.
Arrive and die words are always used intransitively.

It tells the condition status of the subject.

Rama is a beautiful girl.

She is poor girl.

In this way and is subject pan and Rama’s status tells that he is hot and beautiful. “Poor” verb, indicating someone’s position. So these will be called helping verbs.

We will study more about helping verb in next section –

On the basis of tens verbs are of two types –

As it is known from the meaning of the finite word that they are definite. The verbs with which we have to tell the time.
or
Those verbs on which the rules of tenses are applied, and changes have to be brought in them for different times.

They robbed the landlord’s house.

He is my uncle.

When to use two verbs together in a sentence.

I am going to eat.

These verbs act as adjectives in sentences.

Example of the Past Participle

Example of the Present Participle

When the verb itself is made, a noun in the present participle is known as a gerund verb.

Swimming is good for your health.

What do we know from Verb?

2. what has been done to a person or thing –

Example – The door is painted.

3. what is the state or condition of a person or thing –

The fish is alive.

Note: If an answer is found by putting what or whom with verbs in any sentence, it will be a word object, and the verb is transitive.

The ball had been kicked. —- used intransitively

The pilot landed on the plane. —— used transitively

Verbs whose subject and object are the same person are called reflexive verbs.

The verb person and number –

The verb has a three-person forms –

The first – I speak.

The second – You speak.

The third – He speaks.

The verb has two numbers –

Agreement of the verbs with the subject –

The verb and the subject must have the same person and number to make a sentence errorless.

What is helping verbs?

Answer – These verbs are helping the main verb. They mainly state the condition of the subject or object.
Examples – is, am, were, should be, etc.

What is an intransitive verb?

Answer – Those verbs which do not need any object for complete meaning or sense is known as intransitive verbs.
Example – laugh, sing, jump, fly, etc.

What is the main verb with examples?

Answer – These main verbs mainly tell what the subject is doing, have done or wants to do.
Examples-
Write, laugh, work, run, etc.

What is a transitive verb with Example?

Answer – Those verbs which can not tell the whole meaning of a sentence without using an object are known as a transitive verb.

John gave the gift to his father.

He offers a job.

What is the subject-verb agreement?

Answer – The verb and the subject must have the same person and number to make a sentence errorless. This is known as subject-verb agreement.

What is a verb or What is meant by a verb?