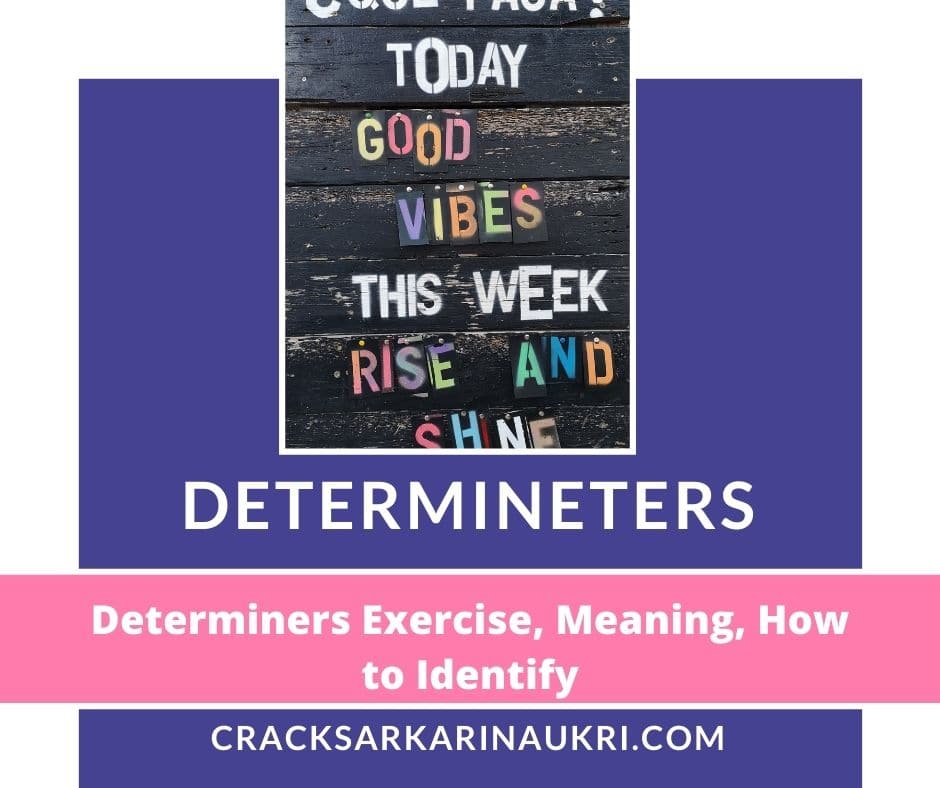 What is a Determiner?

In English grammar a Determiner is a word that is used before a noun to show how the noun is being used, to show how great an effect the noun has, to limit its meaning.

Examples of Definite and Indefinite Articles :

Use of Definite Article – The

The is a definite article that is used when somebody is indicating a particular noun.

In the above examples This and that are used for singular nouns, and These and Those are used for a plural noun.

Quantifiers are used when anybody wants to define the quantity in a noun phrase.

( A lot of, a spoonful of, less, little, much, more, most, A part of, a large amount of, lots of, plenty of, a bottle/cup/glass/ plate of, a kilo/pound/ton/quintal of, a liter/meter of, A loaf of, half of, enough, etc are all quantifiers )

A ) Pick out the determiners in the following sentences –

B) Fill in the blanks

What are determiners in English Grammar?

Answer – English determiners are words – such as a, an, the, each, every, etc. – that are used before nouns to signify their referents.

Is “every” a determiner?

Answer – Yes, “every” is a determiner.

How do you identify a determiner?

Answer – You can identify a determiner depending on its relative position by checking the word which comes before a noun, not after, and any other adjectives that come before a noun.

What are the examples of determiners?

Answer – Determiners include articles (a, an, the ) demonstratives (this, that, those, these), pronouns, and possessive (My, your, our, its, his, her, their), quantifiers (Most, Much, More, little, less, etc.), Numbers (All, one, two.., enough, etc.) distributives (Each, every, either, neither, Both) interrogations (what, which, whose).

What words are determiners?

Answer – A word that is used before a noun to show how the noun is being used, the effect the noun has, its meaning.