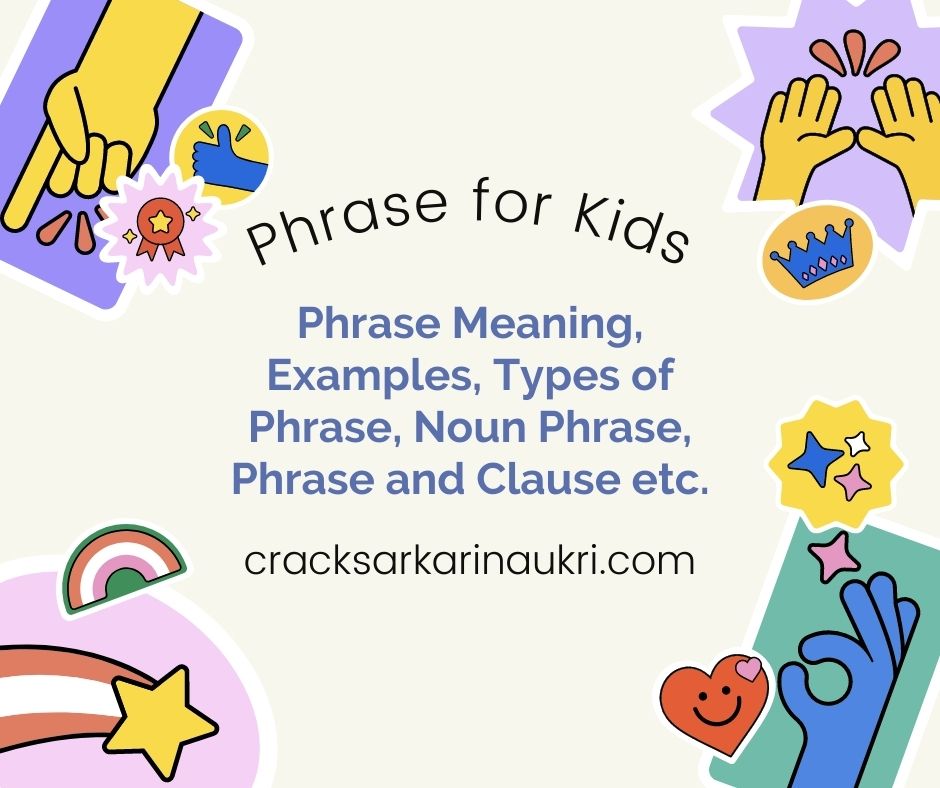 What is a phrase, and what is a clause?

A phrase is a group of words without any subject-verb combination.

A subject-verb combination that makes a group of words is called a clause.

Both clauses and phrases are the building blocks of a sentence. Though they are a group of words, the main difference between them is a subject-verb combination.

Rita is sleeping on the floor.

Here you can see in the first group of words. We can find the subject-verb combination (Rita-subject, sleeping- verb). So we can this is a clause.

While on the other hand, “on the floor”, we can’t find any subject-verb combination, so we can say this is a phrase.

Let’s have another one :

Rahul is talking in the class.

Here on the first group of the word, we can find the subject-verb combination (Rahul-subject + sleeping-verb). So we’ll say this is a clause.

On the other hand, in the group of words “in the class,” we can’t find any subject-verb combination. So we’ll say this is a phrase of this sentence.

What is a Phrase?

Without a subject-verb combination that makes a group of words is called a phrase. It’s used as a single part of speech that can’t stand alone as a complete sentence.

It gives us some sense but cannot make any complete sense.

Let’s crake the definition into pieces-

● It May have a subject but not any verb

● May have any verb but not any subject

● May have neither a subject nor a verb

Let’s understand with some examples:

See, the phrase, “on the table” is a group of a word. It gives us some idea that it’s something about the table, but it didn’t give us any clear idea. But when we said

The book is on the table.

Let’s have another one:

But when we say

The cat is under the table.

2. Children are making noise in the class

3. He is sleeping on the bed

4. Sun was rising over the horizon

5. Reha is sitting at the table.

Now is the concept of phrases is clear to you?

Now let’s see how many types of phrases are there.

There are mainly three types of phrases.

A noun phrase is a phrase that acts or works as a noun in a sentence. A noun phrase is there to modify the head noun (the main noun or pronoun) and any dependent words (modifier) before or after the head.

Special information about Sir is given by the word dependent.

Now let’s see how many ways are there to form a noun phrase.

There are three ways to form a noun phrase-

Our friends have bought a house in the village.

Here “our” is the determiner, and “friends” is the noun, and together they formed the noun phrase, “our friends”.

Those houses are costly.

Here “those” is the determiner and “houses” is the noun, and together they formed the noun phrase, “those houses”.

Our closest friends have just bought a house in the village.

Here “closest” is the adjective, and “friends” is a noun, and together they formed the noun phrase, “closest friends”.

These two good-looking boys are my cousins

Here “these” is the determiner, “two” is the number, “good-looking” is the adjective and “my cousins” is the noun.

The girl with no tantrums is the best.

Here “with no tantrums” is the noun phrase that’s modifying the noun “girl”.

The person in the black shirt is my friend.

Here “in the black shirt” is the noun phrase, modifying the noun “the person”.

A gerund phrase starts with a gerund–ing form of a verb that acts as a noun in a sentence, modifies the noun, and gives more information about the noun.

Let’s have some examples.

The man standing next to you is my brother.

An infinitive phrase starts with an infinitive- ‘to +v1’ that acts as a noun and modifies the head noun.

He didn’t have any students to teach English.

Here “to teach English” is an infinitive phrase that acts as a noun, modifies the head noun “student”.

So here we can say “students to teach English” is our noun phrase.

The man who gave me some money died last night.

The girl talking with Rohan is my sister.

Here “the girl” is modified, and” talking to Rohan” is post-modifier.

So here, you can see we can form a noun phrase by using both pre-modifier and post-modifier.

Let’s have another one.

A tall guy who can fight

Here “a tall” is pre-modifiers, and “who can fight” is the relative clause that coming after the noun “guy”, whom we called post-modifier.

An adjective phrase is a phrase- a group of words without the subject-verb combination that modifies a noun or a pronoun.

Let’s understand it in a better way with some examples.

Here “surprisingly good” is the adjective phrase giving information about the noun movie by modifying the noun” film”.

Let’s have another one.

A verb phrase is nothing but a combination of an action verb and a helping verb (which is also known as an auxiliary verb).

Verbs that show or indicate any action are called action verbs.

Helping verbs are the type of verbs that help or support the main verb of a sentence. As I already said, help verbs are also known as Auxiliary verbs.

“Moral auxiliary verb”- can, could, might, should, would, will, shall, must, ought to etc.

Now let’s have some examples to get a clear concept-

My mother has cooked food.

In this example, the verb phrase is “has cooked”. “Has” is the helping verb that supports the action verb “cook”. So they together formed a “verb Phrase”.

Did you get an idea about verb phrases? If not, let’s have another example.

He will help me to complete homework.

Here “will help” is the verb phrase. “Will” is the helping verb that supports the action verb “help”.

Now I think you got clear about what the verb phrase is.

An idiom is a group of words, just like phrases. They are almost alike, but there few differences that make phrases and idioms different. Let’s talk about those differences.

Let’s have some examples to understand better:

So now you can understand the difference between phrases and idioms.

Any idiom can be a phrase, but any phrase can’t be an idiom.

For example, when we said “once in a blue moon”, we can get some symbolic significance though there’s no literal meaning.

But by the phrase ‘reading a book’, we get neither literal nor metaphorical meaning.

Let’s have some more examples of idioms and their actual meaning to understand better:

I hope you got a clear idea about idioms and similarities or differences with phrases by those examples.

While speaking of phrases and idioms, we also used some famous sayings and expressions in our education which doesn’t have any literal meaning without a complete sentence but has a symbolic meaning.

Let’s have some examples:

(Rohan is a copycat, doesn’t refer that he is a cat, it refers to that he copies someone’s work.)

We used some phrases for kids while teaching them something. Let’s see what they are:

These are the commonly used phrases and idioms used for kids.

Just like in education or case teaching kids, phrases also used while speaking of health and fitness.

They’re the most commonly used phrases in the matter of health.

We used some phrases to inspire that are called inspirational phrases.

Let’s have a look at some inspirational phrases _

How to learn idioms and phrases?

Answer – As we already get the idea about phrases and idioms, you can understand how important it is to learn them.
To learn idioms and phrases first, you should listen to them carefully then try to write them down each time you learned one. The most important part is to use them frequently in your talking.

How do you identify phrases?

Answer – First, we need to find out the subject and verb of the sentence.

“Ram is diving into the pool.”

Here “Ram” is the subject, and “diving” is the verb. So “Ram is diving” is a clause, and the remains “into the pool,” as this doesn’t make any sense, is the phrase of this sentence.

Can a phrase be two words?

How do you define a phrase?

Answer – The phrase is a group of words, can make some sense but not the whole meaning.

What are five examples of phrases?

What are idioms and phrases?

Answer – Idioms and phrases are both groups of words. Phrases can’t stand alone without any sentence.
Idioms themselves have some symbolic meanings.

Answer – A phrase is a group of words having no subject-verb combination.

Click Here – Phrase and Clause ! become a master of Phrase